Ever since software-defined networking (SDN) first came on the scene, the networking community has aimed to harness the technology to make networks agile and to lower the cost of operating complex networks. Network disaggregation has been another step towards this goal. By decoupling merchants’ silicon-based hardware from network operating system, enterprises gain flexibility to choose network components, rapid deployment/decommissioning of services, and cost efficiency of commodity white box switches.

PRISM adoption will not only save capex and opex dollars, but more importantly, it will allow customers to gain business agility and improve overall services’ delivery and efficiency. It can also benefit those who are moving to hybrid cloud and adopting the DevOps model of collaborative development and cooperation.

The primary use cases where PRISM can play a defining role:

In the demo, the use case of PRISM’s scale-out and distributed routing with on-demand cloud bursting of the private OpenStack cloud to a public cloud will be showcased. Supporting hybrid cloud deployments require elastic, agile and high performance private Openstack cloud networking. Neutron, which currently controls various aspects of Openstack networking, is hard to scale given the fact it was originally intended to run as a Linux server. 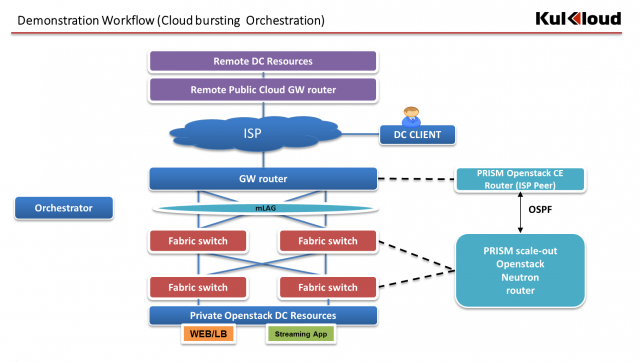 Once such abstraction is achieved, network management will be demonstrated to equate to managing a Linux server while enabling fully distributed hardware switching/routing. Whole arrays of networking software and management tools available for Linux can then be installed and used to administer the network. As a result, for example, complex networking constructs like mLAG can be provisioned as simple Linux bond interfaces. Extended features such as support for dynamic routing (OSPF/BGP), on-demand per-tenant network visibility/bandwidth throttling as well as WAN integration will be showcased. The demo will conclude by highlighting the fact how not only Linux-based, but any third party vRouter virtual network function (VNF) can be used to control the same white box network cluster with KulCloud’s PRISM controller orchestration.

Kulcloud will demonstrate this on upcoming event of SDxCentral Demo Friday. Join on our live show.